While doing a 30 Plus Teams Tour staycation of Kew Gardens , I wanted something to drink, but not an adult beverage and not a coffee from either Dunkin Donuts or Seven Eleven coffee.

While doing some exploring around the area near the Kew Gardens Long Island Railroad Station was, I noticed a place called , ‘Mr. Wish’.

It claimed that it had ‘healthy bubble drinks and fruit teas.’

I looked at the pictures on the store window and on the menu, and I saw a drink that I hadn’t had since I lived in Los Angeles .

It was Pearl Milk Tea.

I had time to kill before my train back to Locust Manor came.

The Pearl Milk Tea was delicious , and made just the way I like my bubble tea.

No sugar needed, and big bubble pieces that are big but not that big that they won’t fit through your straw .

It just so happens that Mr. Wish’s teas and fruit juices are the number one brand in Taiwan and besides having stores in Taiwan and the United States , they also have locations in China , Vietnam , plus 150 other locations.

It’s easy to see why.

The store that I went to is located at 80 – 62 Lefferts Boulevard , Kew Gardens .

Mr. Wish claims that they have ‘authentic Fruit and Bubble Teas.’

If you can’t get to New York City or the borough of Queens, see if there is a Mr. Wish in your city.

You won’t be disappointed and the prices are very reasonable . 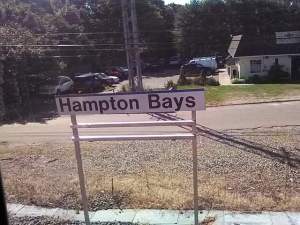 My 30 Plus Teams Tour staycation took me to a place that I hadn’t been to in years .

People on Long Island call this village, ‘the end of Long Island’, because technically , it is.

You can take a ferry across the river and you’re in the state of Connecticut .

You discover , as I did, if you’re listening to your radio and expect to hear stations from New York , no such luck.

If you go by Long Island Railroad as I did, be ready for a long ride.

3 hours to be exact, with two transfers to get there going.

Coming back though, I just had one transfer at the last stop, Jamaica – JFK .

If you go in the summer , especially on a weekend or a holiday, expect to see a really crowded train.

When I was little, I went fishing with relatives out to Montauk .

Nothing has changed, Montauk is still known for fishing.

Don’t be surprised to see young and old bringing their fishing equipment on this train.

Technically , the village of Montauk is part of those ritzy Long Island villages known as The Hamptons .

Montauk is part of East Hampton .

Like many parts of Long Island , Montauk is known for its beaches.

Many of the beaches on Montauk are now private, but you can take pictures.

Montauk’s most famous landmark is the Montauk Lighthouse , but because it’s not close to the Montauk station and I didn’t have that much time to explore, I didn’t get to see it up close and personal.

Every picture you see of Montauk, you’re going to see the lighthouse .

It’s that much of an icon here at the end of Long Island .

To say that I was tired from this 30 Plus Teams Tour of Montauk would be an understatement .

I was and I walked so much in the wrong type of shoes that I got blisters on the back of both of my feet.

But call me crazy, I would do it again .

No, not get blisters on my feet , go out to Montauk .

If I had one problem with the station at Montauk it would be get some benches on the platform.

Other than that, I enjoyed my journey to the village known as the end of Long Island .