This  building  is located  in  one of  the  most  visited  neighborhoods  in  the city of Baltimore ,  Maryland .

The Inner  Harbor  is one of  the  top tourist attractions  in the city.

The World  Trade  Center  in Baltimore .

You can go inside  the  building  and get a bird’s  eye  view of  the  Inner  Harbor  as well as some other parts  of  the  city.

However, it’s  what’s  inside  of  the  building  that  makes  one stop and reflect  on what happened  on this day 16 years ago  in New York  City ,  Washington  DC ,  and  Pennsylvania .

On the other side  of  the  marble  are the  names of  the  people  who were either on the plane from Washington  DC  that crashed into  the  Pentagon  or those people  who lived in Maryland  and worked at the Pentagon .

On top of the marble is a mangled piece of  steel  from the World  Trade Center  in New York .

It’s  a very  sobering  sight  and I  wasn’t  the only  tourist  who stopped  to look at  this  simple  but moving monument  and to never forget what happened  16 years ago today.

If you happen  to  be visiting  Baltimore  and go to the Inner  Harbor ,  be sure to  stop by the World  Trade Center in Baltimore  and pay your respects. 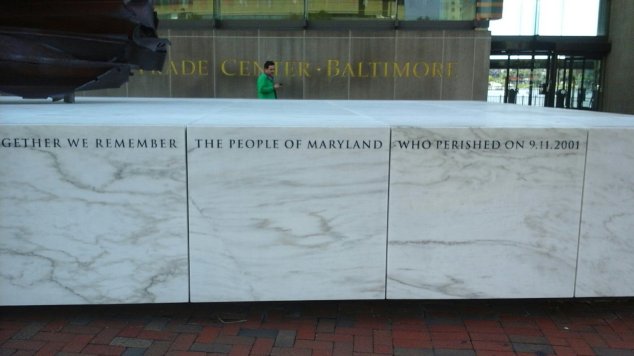